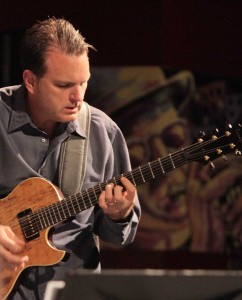 of Hawaii and a 2012 West Coast, Texas and Louisiana tour with the Louis Romanos Quartet, a 2012 tour of Hawaii with the Cypress Park Jazz Quartet and an appearance on Jeremy Davis and the Fabulous Equinox Orchestra’s critically acclaimed newest recording, The Great American Swagger. Sumner is also currently working on the production and recording of several arrangements of jazz standards and American popular songs for solo jazz guitar.

His playing can be heard on more than a dozen recordings including the three critically acclaimed releases from the New Orleans based group Permagrin. He took first prize in the professional division at the University of Texas-Brownsville International Guitar festival in 2009 with the McPike/Sumner Duo. New Orleans was his home for 13 years during w
hich he performed regularly in the clubs and led the jazz band at Lusher Charter School, an arts-based magnet school. He has toured worldwide with several acts including Permagrin, the Louis Romanos Quartet, Glyn Styler, and Jesus Christ Superstar.

He is the Assistant Professor of Music Education and Guitar at the University of Louisiana at Monroe and holds degrees from Capital University and the New England Conservatory of Music. He is currently in the final stages of completion of a Doctorate of Music Education from the Jacobs School of Music at Indiana University. Daniel Sumner is a sponsored Benedetto Artist and plays a one-of-a-kind custom 16-B archtop jazz guitar hand-built by Bob Benedetto. He plays AER amplifiers and uses Thomastik-Infeld strings.